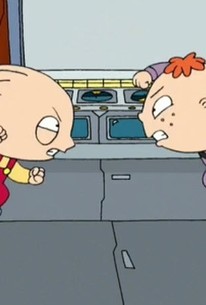 Lois (voice of Alex Borstein) learns that her sister Carol (voice of Carol Kane) is having a baby and that her husband has left her. Lois and Peter (voice of Seth MacFarlane) go to visit Carol, asking Quagmire (MacFarlane) to baby-sit. When Carol anxiously tells Peter that she's gone into labor, Peter warns her, "You let the kid start calling the shots now and you're screwed." Peter stops at the drive-thru on the way to the hospital. When Lois reminds him that Carol is having a baby, he adds a Kid's Meal to his order. At the hospital, the doctor injures himself, and Peter is called upon to deliver the baby. The experience leaves Peter yearning to experience fatherhood again, and he and Lois decide to have another child. When Stewie (MacFarlane) learns of their plan, he's horrified. He remembers "what happened to Bobby when they added Cousin Oliver to The Brady Bunch." "As God is my witness," he vows, "from this day forward, Peter and Lois shall not conceive." Stewie sets about thwarting his parents' intimacy by crawling into their bed at night. When he attempts to frame Peter by using Lois' lipstick to stain his shirt collars, he gets distracted by his reflection in the mirror and gets busted. "All this time spent trying to keep people from having sex!" he cries. "Now I know how the Catholic Church feels." Eventually, Stewie shrinks himself and his laser gun-equipped "spaceship" to near-microscopic size, and enters Peter with the intention of making all-out war on his sperm. But he's surprised to find a formidable opponent (voice of Wallace Shawn) in one of Peter's seed. This episode features the voice of frequent contributor Gary Cole as Mike Brady. Cole also played Brady in Brady Bunch feature films.

Adam West
as Himself

Majel Barrett
as The Computer

Majel Barrett Roddenberry
as The Computer 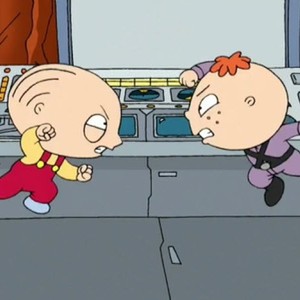