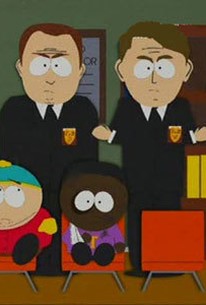 The fourth season premiere of South Park seeks to offend everyone by satirizing political correctness and race relations. Token, South Park's one minority child, claims that Eric's "fat ass" was responsible for his success at a sled race. Eric responds by throwing a rock at him. Soon he is being prosecuted for a hate crime. Will the boys get him out in time so that they can win the big race? This savagely biting episode of South Park, "Cartman's Silly Hate Crime 2000," first aired April 12, 2000, on Comedy Central.