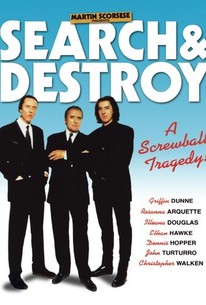 Martin Mirkhein (Griffin Dunne) is a failed entrepreneur trying to figure out how to pay a huge tax bill to the State of Florida when he gets a brainstorm -- Daniel Strong, the inspirational men's movement novel by New Age philosopher Luther Waxling (Dennis Hopper), would make a great film. Never mind that Mirkhein doesn't know a thing about making movies -- he decides that this film is his destiny, and he heads out with his girlfriend/personal assistant/aspiring screenwriter Marie (Illeana Douglas) to visit Waxling's representatives, who don't react with much enthusiasm when Mirkhein suggests that he'd like them to give him the film rights as well as the money to produce the movie. In search of financing, Mirkhein finds himself working with Kim Ulander (Christopher Walken), a businessman who doesn't mind if people think he's a gangster (and boy, is he something at karaoke night!), and Ron (John Turturro), a second-rate hood with a severely impaired fashion sense. The first directorial effort from artist David Salle, Search and Destroy was executive produced by Martin Scorsese, who also plays a small role as a tax agent. ~ Mark Deming, Rovi

Martin Scorsese
as The Accountant

Critic Reviews for Search and Destroy

Audience Reviews for Search and Destroy