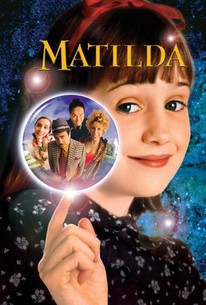 Danny DeVito-directed version of Matilda is odd, charming, and while the movie diverges from Roald Dahl, it nonetheless captures the book's spirit.

2:59
Matilda: Official Clip - And the Trunchbull Was Gone

Based on the book Matilda, by British children's author Roald Dahl, this film moves the setting from the U.K. to the U.S.; otherwise it follows the original closely. Matilda Wormwood (Mara Wilson) is an extremely curious and intelligent little girl who is very different from her low-brow, mainstream parents (Danny DeVito and real-life wife Rhea Perlman), who quite cruelly ignore her. As she grows older, she begins to discover that she has telekinetic powers. Not until a teacher shows her kindness for the first time does she realize that she can use those powers to do something about her sufferings and help her friends as well. Villains from the awful Miss Trunchbull (Pam Ferris), headmistress of her miserable school Crunchem Hall, to her parents and older brother begin to feel her ire. Look for Paul Reubens (aka Pee Wee Herman) in a small part as an FBI agent investigating Matilda's shady father. ~ Clarke Fountain, Rovi

J.C. Alexander
as Nearby Boy

Joshua Alvarez
as Child at Assembly

Rachel Snow
as Child at Assembly

Jennifer Key
as Child in Classroom

Marty Bautista
as Child in Classroom

Raina Cease
as Child in Classroom

Jonathan Cease
as Child in Classroom

Vinnie Buffolino
as Child in Classroom

Marcella Sassano
as Child in Classroom

Shannon Hughes
as Child in Classroom

Christel Khalil
as Child in Classroom

Cassie Colaw
as Child in Classroom

Justin Stout
as Child in Classroom

Cindy Tran
as Child in Classroom

Jonathan Feyer
as Child in Classroom