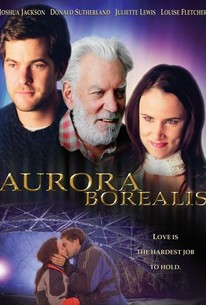 Deeply reminiscent of other, better films, Aurora Borealis nonetheless succeeds on the strength of winning performances from Sutherland and Jackson.

Duncan Shorter. Bright. Charming. Never met a job from which he couldn't be fired. His buddies are growing up and beginning lives of responsibility, but Duncan is still looking for that spark. It arrives from a most unexpected corner. Visiting his grandmother Ruth's new senior residence, Duncan jumps at the chance to become the building's handyman. It will keep him close to his grandfather Ronald, whose faculties are failing as quickly as the light of this Minnesota winter. When Ronald goes, Duncan realizes, he'll take with him the last shadow of Duncan's father, whose unresolved death years earlier still haunts him. And, then there's Ronald's feisty home nurse, Kate, a restless spirit as free as Duncan is trapped. They soon find themselves drawn together in a relationship neither one wants but both of them need. Kate's freedom is seductive, but what is it hiding? With the burning light of Kate on one side and Ronald's dying flame on the other, Duncan confronts his own darkness and takes his first fledgling steps into a brighter tomorrow.

Krista Bridges
as Cara
View All

"24’s" Michelle Dessler to Battle Aliens and Predators
View All