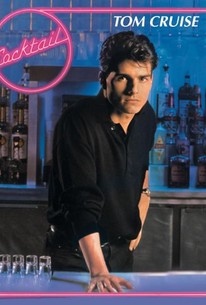 There are no surprises in Cocktail, a shallow, dramatically inert romance that squanders Tom Cruise's talents in what amounts to a naive barkeep's banal fantasy.

After being discharged from the Army, Brian Flanagan (Tom Cruise) moves back to Queens and takes a job in a bar run by Doug Coughlin (Bryan Brown), who teaches Brian the fine art of bartending. Brian quickly becomes a patron favorite with his flashy drink-mixing style. Brian adopts his mentor's cynical philosophy on life and goes for the money. He leaves his artist girlfriend Jordan Mooney (Elisabeth Shue) for Bonnie (Lisa Banes), a wealthy, high-powered executive. Brian soon must chose between the two, as he evaluates his options. Scriptwriter Heywood Gould displayed his sense of humor when assigning the character name "Mr. Mooney" to Lucille Ball's real-life son-in-law, actor Laurence Luckenbill. Television fans of The Lucy Show will recall Mr. Mooney, played by Gale Gordon, as Lucy's fussy financial boss. The film is more memorable for the 17-song soundtrack and plays like a series of MTV videos. Cocktail was a big draw at the box office in 1988.

Sandra Will Carradine
as Job Interviewer

Richard B. Livingston
as Job Interviewer

Adam Furfaro
as Young Couple in Deli
View All

50 Worst Summer Movies of All Time
View All