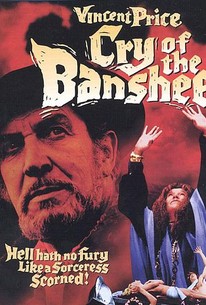 Cry of the Banshee

The inimitable Vincent Price puts an interesting spin on this otherwise pedestrian witch-hunt exercise -- a rehashing of Witchfinder General (aka The Conqueror Worm) and several of Roger Corman's numerous Poe variations from the previous decade. Here Price plays Edward Whitman, a corrupt, sadistic magistrate in 16th-century Ireland who puts a quick and deadly stop to the activities of a local Druidic coven... but not before the sect's leader Oona (Elisabeth Bergner) puts a curse on him and the Whitman family line, calling up a vengeful spirit known as a "sidhee" which takes flesh in the form of an otherwise mild-mannered stable boy (Patrick Mower). As swift and violent retribution works its way through the Whitman family, so does this film snowball toward its bizarre and muddled conclusion -- made all the more confounding by rather choppy editing. Just like Conqueror Worm and half a dozen others, this was fallaciously marketed by distributor American International Pictures as yet another adaptation of the works of Edgar Allan Poe -- as if AIP hadn't kicked Poe's corpse around enough in the '60s.

Guy Pierce
as Villager
View All

Critic Reviews for Cry of the Banshee

Audience Reviews for Cry of the Banshee

Cry of the Banshee Quotes