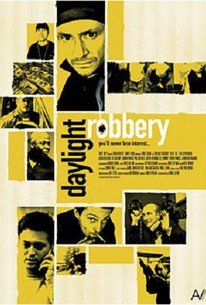 This poorly executed brit crime caper wants to be a Guy Ritchie film, but ends up more like an extended Eastenders episode.

Using the chaos of the World Cup competition as their cover, a crew of crackerjack bank robbers scheme to steal millions of pounds in used bank notes from a London bank before the cold hard cash is incinerated as scheduled. After checking in early for a flight to Germany in order to establish their alibi, the thieves quickly sneak out to the airport parking lot, pile into a van, and stealthily drive towards their target. Their plan to smash the van into the building and grab the cash before catching their flight goes suddenly awry, however, when a member of the gang is badly injured in the crash. With the clock counting down before their flight takes to the sky, the group is soon forced to alter their plan as police attempt to negotiate with the crew through the crumpled van. The negotiations are quickly staled when the robbers refuse to negotiate, leaving the police with no other choice than to hatch a plan to storm the bank. When the police do finally gain entry into the bank, the sight they find leaves even the most sharp-minded law enforcer hopelessly speechless.