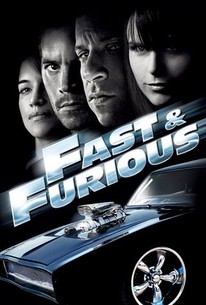 While Fast and Furious features the requisite action and stunts, the filmmakers have failed to provide a competent story or compelling characters.

Vin Diesel and Paul Walker return to the film franchise that helped to launch each of their respective careers as the Fast and the Furious series winds to a close under the creative eye of Fast and the Furious: Tokyo Drift director Justin Lin. Fugitive ex-con Dom Toretto (Diesel) is back in Los Angeles to seek out the truth behind a high-profile crime, but his presence in town doesn't sit well with Agent Brian O'Conner (Walker). These two rivals are forced to unite in the cause of fighting a common enemy, however, when convoy heists and precision tunnel crawls lead them out of Los Angeles and into the Mexican desert. Now, in order to take down a formidable opponent with some serious skills behind the wheel, Dom and Brian forge an uncertain partnership while exploring thrilling new frontiers in the fine art of racing. Michelle Rodriguez, Jordana Brewster, and John Ortiz co-star. ~ Jason Buchanan, Rovi

Your Epic Movie Franchise Binge Guide: The Best Way to Watch the Biggest Series
Rank Every Fast & Furious Movie!
Quiz: Match The Fast & Furious Star To Their Car!
View All