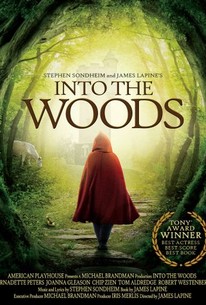 Into the Woods Ratings & Reviews Explanation

Into the Woods Photos

Originally broadcast as part of the American Playhouse series on PBS, this video captures a performance by the original cast of the popular Broadway musical. With songs and lyrics by Stephen Sondheim and a book by James Lapine, who also directed the stage production, Into the Woods humorously combines a number of classic fairy tales into one over-arching narrative. A baker and his wife are assigned a number of tasks by a nearby witch; only after completing these duties will they be able to give birth. During their quest to fulfill the witches' demands, they encounter Little Red Riding Hood, Rapunzel, Cinderella, and numerous other fairy tale figures. The traditional stories are parodied and altered at will, yet the original fairy tales' sense of wonder and, at times, darkness remains intact. The score, winner of Broadway's Tony Award, includes such songs as Children Will Listen, Giants in the Sky, and No One Is Alone.

Bernadette Peters
as The Witch

Critic Reviews for Into the Woods

There are no critic reviews yet for Into the Woods. Keep checking Rotten Tomatoes for updates!

Audience Reviews for Into the Woods

Into the Woods Quotes