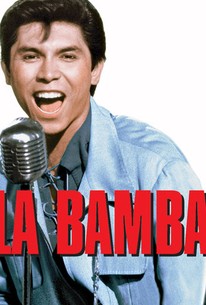 La Bamba is the story of 1950s rock 'n' roll rage Ritchie Valens (born Ricardo Valenzuela), played herein with gusto and credibility by Lou Diamond Phillips. The film follows 17-year-old Ritchie as he strolls from one end of his California barrio to the other, guitar in hand. We meet Ritchie's colorful Mexican/American family, who react to his fame with varying degrees of pride and envy. And we meet the ladies in his life: his ambitious mother Connie Valenzuela (Rosana De Soto), his half-sister Rosie Morales (Elizabeth Pena), and blonde classmate Donna Ludwig (Danielle von Zerneck), who inspired Ritchie's first hit "Donna." Both this song and "La Bamba" are given con brio interpretations by Lou Diamond Philips and by the contemporary group Los Lobos, who appear in the film as the Tijuana band. Also making cameo appearances are the real-life Mrs. Connie Valenzuela and Bob Morales, Richie's half- brother (played in the film by Esai Morales). Those familiar with The Buddy Holly Story (1978) don't need to be reminded what happens after Ritchie, Holly (Marshall Crenshaw) and The Big Bopper board that plane on February 3, 1959. The tragic coda of La Bamba is not unduly emphasized; this is a celebration of Ritchie Valens' life, not a eulogy.

Allison Robinson
as Girl at Party
View All