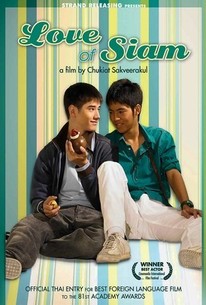 Two young men go from friends to lovers as one stands on the verge of stardom in this drama from Thailand. Mew and Tong were best friends as children, and Tong's sister Tang was a close confidant to them both. Years later, Mew (Witwisit Hiranyawongkul) has become a professional musician, and he's the lead singer and songwriter with a pop group, August, who are poised to achieve major commercial success. One day, Mew happens to meet Tong (Mario Maurer) for the first time in years, and the two waste no time getting reacquainted; while both of them have girlfriends, it becomes clear that there's a bond between them that they've never felt with other people, and their friendship begins to grow into something deeper. Meanwhile, Tong's family is still reeling from Tang's mysterious disappearance several years before, and her father, Korn (Songsit Roongnophakunsri), has become a hopeless alcoholic. When Tong meets June (Chermarn Boonyasak), a personal assistant for August, he's struck by her uncanny resemblance to Tang, and asks her to pose as his sister in hopes her presence will help his father snap out of his depression. Rak Hang Siam (aka The Love of Siam) was written and directed by Matthew Chookiat Sakveerakul, who also had a hand in writing the songs for the film. ~ Mark Deming, Rovi

There are no critic reviews yet for Love of Siam (Rak haeng Siam). Keep checking Rotten Tomatoes for updates!