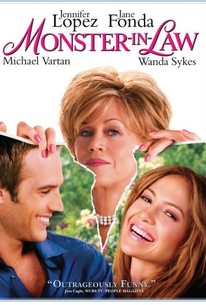 While Jane Fonda steals the movie in her return to the screen, a tired script and flimsy performances make this borderline comedy fall flat.

It's not unusual to see two women fighting over the same man in a movie, only this time it's his mother and his fiancée vying for his attention in this broad comedy. While Charlotte Cantilini (Jennifer Lopez), known to her friends as Charlie, has never had much luck in her love life, one day her ship arrives in a big way when she meets Kevin Fields (Michael Vartan), a doctor who is charming, handsome, and wealthy. Kevin also has a famous mother, Viola Fields (Jane Fonda), who has enjoyed a long and successful career as a news broadcaster. When Kevin and Charlie fall head over heels for one another, he opts to propose marriage to her as he's introducing Charlie to Viola over lunch. However, as far as Viola is concerned, this could not come at a worse time -- Viola has just been fired from the anchor desk, and regards her son as the only anchor left in her life. Not willing to share Kevin with anyone, Viola sets out to sabotage his relationship with Charlie in any way she can, often with the wary assistance of her secretary Ruby (Wanda Sykes). But once Charlie gets wind of Viola's schemes, she decides two can play this game. Monster-in-Law marked Jane Fonda's return to the screen after a long leave of absence; it was her first film after co-starring with Robert De Niro in 1990's Stanley & Iris. ~ Mark Deming, Rovi

Will Arnett
as Kitt

Christina Masterson
as Young Girl at Wedding
View All