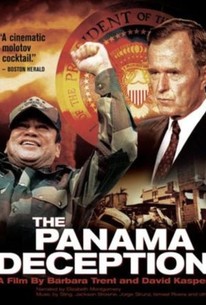 Barbra Trent's Oscar-winning documentary takes a harsh look at a black period in 20th-century democracy, the late '80s and early '90s when during "Operation Just Cause," the U.S. invaded Panama, ostensibly to oust dictator and known arms and drug kingpin General Manuel Noriega, whom the U.S. aided for over a decade. Basing her information on eyewitness accounts, Trent alleges that U.S. troops killed up to 4,000 Panamanian men between the ages of 15 and 55, buried them secretly in mass graves, and then reported back home that only 250 civilians died. She also alleges that the troops destroyed untold amounts of buildings. Shocking photographs back up her stunning allegations. Trent spares neither the U.S. government nor the media -- that blindly accepted and reported anything released by the White House -- from blame in keeping the horror a secret. The film begins with a history of the U.S. relations with Panama, beginning with Panama's fight for independence from Colombia -- something the U.S. backed so it could build the Panama Canal -- to President Carter's 1977 treaty that would give control over the vital shipping lane back to Panama in the year 2000. One of the most shocking aspects of the story is that according to Trent, "Operation Justice" was really launched so that the U.S. could renege on the treaty and retain control. She also suggests the U.S. military used the invasion to test out sophisticated new weapons in preparation for the Gulf War. The photos and violence depicted are not for the squeamish. Elizabeth Montgomery narrated the events.

Critic Reviews for The Panama Deception

Audience Reviews for The Panama Deception