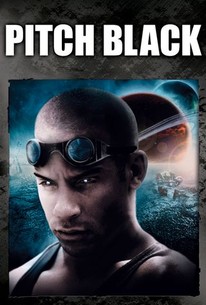 Despite an interesting premise (and a starmaking turn from Vin Diesel), Pitch Black is too derivative and formulaic to fully recommend to sci-fi or action fans.

1:28
Pitch Black: Official Clip - Found Something Worse Than Me?

2:53
Pitch Black: Official Clip - Would You Die for Them?

In this science fiction thriller, a spaceship is transporting a disparate group of people to a far-away galactic outpost called New Mecca. Mechanical failures cause the craft to crash-land on an abandoned planet that has three suns and no night. The only member of the crew to survive is junior pilot Carolyn Fry (Radha Mitchell), while the passengers who climb from the wreckage include a police officer (Cole Hauser) and the prisoner he's transporting, Riddick (Vin Diesel). As Fry and the other survivors survey the abandoned dwellings of the desert world while trying to decide what to do next, one of them is killed by a mutant creature living in an abandoned mining site. The vicious and bloodthirsty mutants, who live underground, have killed all previous inhabitants of the planet; they cannot stand sunlight, but research reveals that the planet has a total eclipse every 22 years, and the latest one is due any moment. Pitch Black was directed by David N. Twohy, who also made the sci-fi cult item, The Arrival. ~ Mark Deming, Rovi

Vin Diesel’s 10 Best Movies
Weekly Ketchup: Vin Diesel to Star in Big Screen Version of Kojak
A Third Installment for The Chronicles of Riddick?
View All