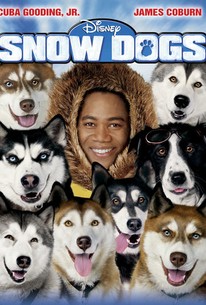 Two Oscar-winning actors add a family-oriented comedy to their resumes with this Disney-produced arctic adventure. Snow Dogs stars Cuba Gooding Jr. as Ted Brooks, a Florida-dwelling dentist with a successful chain of offices and a comfy, poolside lifestyle. All this changes, however, when he finds out that he was actually adopted as a child, and that his birth mother has died and left him an inheritance in her home state of Alaska, of all places. After arriving in the snow-bound clime, Ted learns that he has been willed a pack of cutely named sled dogs: Demon, Diesel, Dutchess, Nana, Mack, Scooper, Sniff, and Yodel. Problem is, the town's premiere sled-dogger, Thunder Jack (James Coburn), wants the pack for himself, and encourages Ted to go back to his tropical environs. But with a major sled-dog race looming, Ted's inspired to learn the ropes, as it were, and prove himself worthy of his birth mother's inheritance -- any way he can. Snow Dogs was directed by Jingle All the Way's Brian Levant and features some animatronic dog effects by Jim Henson's Creature Shop; the script was very loosely adapted from popular author Gary Paulsen's nonfiction book Winterdance: The Fine Madness of Running the Iditarod.

Michael Bolton
as Himself

Jason Pouliotte
as Sneed Brother No. 1

Randy Birch
as Vet No. 2

David Boyce
as Sneed Brother No. 2

Tracey Henderson
as Vet NO. 1

Donnelly Rhodes
as Race Official No. 1

Jay Brazeau
as Race Official No. 2

Veronica Shattuck
as Chatting Woman No. 1

Nicola O'Shea
as Chatting Woman No. 2

Box Office Guru Preview: Chan and Tucker Back in Action
An Early Peek at the Other "World Trade Center" Movie
Critical Consensus: "Eight Below" Is Above The Rest
View All