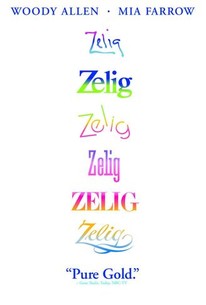 Leonard Zelig, the "human chameleon", is profiled in this mock-documentary. Director Woody Allen appears as Zelig in scenes that purport to be vintage newsreel clips of the 1920s and 1930s, but are actually clever recreations, "aged" and scratched-up Citizen Kane-style by special-effects maestros Joel Hynick, Stuart Robinson and R. Greenberg Associates. An appropriately pompous narrator details the life and times of Leonard Zelig, whose overwhelming desire for conformity is manifested in his ability to take on the facial and vocal characteristics of whomever he happens to be around at the moment. He shows up at batting practice with Babe Ruth, among William Randolph Hearst's guests as San Simeon, side by side with Pope Pius at the Vatican, and peering anxiously over the shoulder of Adolf Hitler at the Nuremberg Rally. Becoming a celebrity in his own right, Zelig inspires a song, a dance craze, and a Warner Bros. biopic. Mia Farrow plays Dr. Eudora Fletcher , a psychiatrist who tries to "reach" Zelig and ultimately falls in love with him (all of Farrow's scenes are in black-and-white and allegedly culled from archive footage; Ellen Garrison, whose resemblance to Farrow is uncanny, plays the older Dr. Fletcher in the interview sequences). In the manner of Reds, the influence of the fictional Leonard Zelig on popular culture is discussed by such real-life notables as Susan Sontag, Irving Howe, Saul Bellow and Dr. Bruno Bettenheim.

Ralph Bell
as Other Doctor

Richard Whiting
as Other Doctor

Will Hussung
as Other Doctor

Eli Resnick
as Man in Park

Prof. John Morion Blum
as Himself

Gale Hansen
as Freshman No. 1

Wendy Craig
as Herself

Michael Jeter
as Freshman No. 2

Paula Trueman
as Woman at Telephone

Ed Lane
as Man on Telephone

Will Holt
as Rally Chancellor

Susan Sontag
as Herself

Irving Howe
as Himself

Saul Bellow
as Himself

Dr. Bruno Bettelheim
as Himself

John Morton Blum
as Himself

Ed Herlihy
as Himself

Dwight Weist
as Himself

Gordon Gould
as Himself

Windy Craig
as Himself

Jurgen Kuehn
as Himself
View All