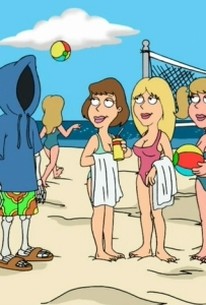 Peter (voice of Seth MacFarlane) and Lois (voice of Alex Borstein)' anniversary is coming up, and Lois isn't interested in gifts so much as romance. But Quagmire (MacFarlane) gets the guys a tee time at the fancy Barrington Country Club. Peter sends Lois on a "romantic" anniversary scavenger hunt (i.e. wild goose chase), so he can spend the morning golfing. Cleveland (voice of Mike Henry) can't play due to family obligations, but Peter insists on going forward. Then it starts to rain, and his friends go home, but Peter soldiers on. While Lois races around town searching for the clues he's left for her, Peter is struck by lightning on the golf course. Death (voice of Adam Carolla) makes another appearance, but he reassures Peter that he's just having an out-of-body, "near-death experience." Death warns Peter that Lois will divorce him one day. He can't put Peter back into his lifeless body until he has a revelation, but Peter can't seem to grasp the lesson that Death is trying to impart. He revisits his past -- his courtship of Lois, his disastrous first meeting with her father, after which her dad had him knocked unconscious, rolled up in a carpet, and dumped naked into the ocean. During their adventures, Death has to return home for lunch with his mother (voice of Estelle Parsons), who nags him about his own lack of a girlfriend. In exchange for Death's help with Lois, Peter helps Death make a date with the woman of his dreams. This episode features the vocal talents of Peter Frampton.