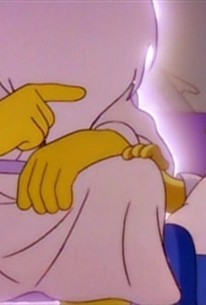 Homer the Heretic
The Simpsons Season 4

It's a frosty Sunday morning in Springfield, and while Marge Simpson (voice of Julie Kavner) and her children, Bart (voice of Nancy Cartwright), Lisa (voice of Yeardley Smith), and Maggie, are getting ready to go to church, Homer (voice of Dan Castellaneta) just can't be bothered to get out of bed. Annoyed, Marge leaves without Homer, taking the kids with her. While his wife and children fidget through an especially tedious sermon and fight foul weather on the way home, Homer sleeps in, feasts on his "patented Space-Age Out-of-This-World Moon Waffles," and enjoys a football game on television. Convinced he's had the best Sunday morning of his life, Homer decides to renounce churchgoing, and in a dream God gives Homer the go-ahead to start his own faith. Marge is more than a bit taken aback by Homer's decision to renounce his faith, but nothing she says can dissuade him until Homer accidentally sets his house on fire while the rest of the family is at church. "Homer the Heretic" was first aired on October 8, 1992. 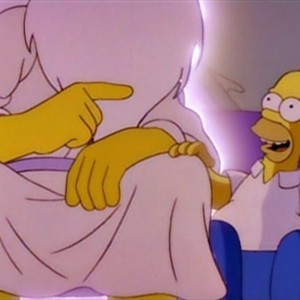