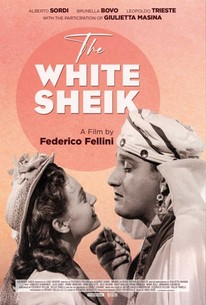 The White Sheik (Lo Sceicco Bianco), Fellini's first solo flight as director, is a gentle lampoon of the idolatry heaped upon movie stars. An impressionable young bride, Wanda (Brunella Bovo) accompanies her husband Ivan (Leopoldo Trieste) on a dull honeymoon, full of meetings with family members and the papal father. Bovo fantasizes over matinee idol Fernando Rivoli, AKA The White Sheik (Alberto Sordi), the hero of a photo strip comic. She repeatedly drifts away from her husband and back, in periodic attempts to find The Sheik, ultimately repairing to the location site where Sordi's latest film, The White Shiek, is in production. Her inevitable disillusionment with the vainglorious Sordi is intercut with her husband's comic (and desperate) attempts to explain his wife's absences at family gatherings to his disgruntled relatives. After a comically inept suicide attempt, Bovo and Trieste are reunited. Featured in the cast is Fellini's wife Giuletta Masina as a prostitute named Cabiria, who'd be given a vehicle of her own, Nights of Cabiria, in 1955. Based on "an idea" by Michelangelo Antonioni, The White Sheik was the main inspiration for Gene Wilder's The World's Greatest Lover (1977).

Mimo Billi
as Man on the Beach