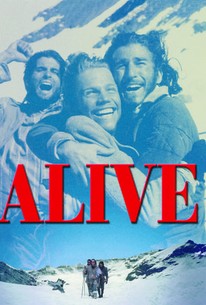 Alive, a taut psychological drama based on a true plane crash in the Andes mountains, shows the lengths ordinary young men will go to survive. A rugby team from Uruguay charters a plane to fly across the Andes. When the plane crashes, less than 25 people survive. Attempts to locate the plane are hampered by the remote location and bad weather, and soon hope is given up for finding anyone alive. After weeks without food, huddled in the hull of the aircraft, the passengers are faced with the choice of eating the dead, or dying themselves. The excellent cast of young performers, including Ethan Hawke, Vincent Spano and Illeana Douglas conveys the desperation and will to survive which lead to the eventual rescue of the survivors. The director, Frank Marshall superbly defines the dilemma faced by each of the survivors as they make their own moral decisions as to whether they will resort to cannibalism or die. The special effects are superb and the plane crash is truly spectacular, giving the viewer a first hand look at the effects of impact on the small plane. Alive -- well-acted, directed and photographed -- avoids cheap exploitation of the more sordid details of the incident and instead focuses on the heroism and determination of the survivors.