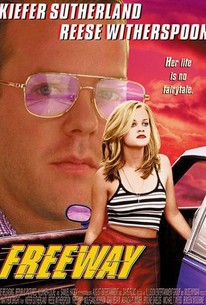 A modern update on the tale of Little Red Riding Hood, Freeway is an audacious black comedy with a star-making performance from the young Reese Witherspoon.

In this postmodern exploitation flick loosely based on "Little Red Riding Hood," the uneducated daughter of a drug-addicted prostitute flees the foster-care system in search of her long-lost grandmother but meets up instead with a serial killer. Vanessa (Reese Witherspoon), a nearly illiterate firebug and serial shoplifter, desperately clings to normalcy even though her mother turns tricks, does drugs, and manages to ignore the fact that the girl's stepfather Michael T. Weiss has been abusing her for years. When both of her parents get arrested, Vanessa steals the car of her family-services caseworker (Conchata Ferrell) and heads up Interstate 5 in search of her paternal grandmother, who's never met her. Car problems force her to accept a ride from Bob Wolverton (Kiefer Sutherland), a youth counselor who uses charm and sympathy to get the girl to open up. Confessing the sordid details of her childhood to Bob, Vanessa is shocked when he suddenly declares that she's one of the "garbage people" and that he plans to murder her and have sex with her corpse. Bob, it turns out, is the "I-5 Murderer," who's been slaughtering young prostitutes in the Los Angeles area. Thanks to a gun borrowed from her fiancé, Vanessa manages to turn the tables on Bob, shooting him repeatedly and leaving him for dead. He survives, Vanessa is arrested, and the two meet up again in court -- with her unrepentant, even though the police disbelieve her story, him flanked by his prim wife (Brooke Shields) and the righteous indignation of the American legal system. Locked up in the juvie for psychological evaluation, Vanessa gets in touch with her wild side and eventually escapes, heading off to her fateful meeting with grandma. Although Freeway was originally filmed for HBO, vigorously positive critical response eventually earned it a theatrical release. Alanna Ubach, who portrays Vanessa's nemesis/accomplice Mesquita, would go on to appear with Witherspoon in Legally Blonde. Freeway also features two Clueless alumni: Dan Hedaya, as a police detective, and Brittany Murphy, as the disfigured lesbian who befriends Vanessa in lock-up. Michael T. Weiss, who previously appeared in gay indie Jeffrey, appears in both Freeway and its sequel, Freeway 2: Confessions of a Trickbaby.

Robert Peters
as Cop No.2

Craig Barnett
as Cop No. 3

Ben Meyerson
as Cop at Truckstop

Monica Creel
as Twin No.1

Leanna Creel
as Twin No. 2

Ria Pavia
as Flo the Waitress
View All