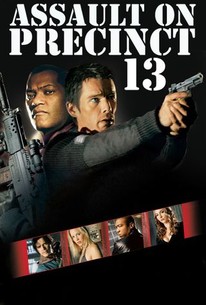 This remake has been praised by some as an expertly made B-movie, and dismissed by others as formulaic.

This action-packed remake of the John Carpenter classic tells the tale of an under-manned Detroit police precinct on its last day of operation that finds itself under siege by a ruthless force that will not stop. This time, a notorious cop-killer and mobster Marion Bishop (Laurence Fishbourne) is unexpectedly brought into the precinct during a blizzard on New Year's Eve, much to the dismay of police sergeant Jake Roenick (Ethan Hawke). By nightfall, the remaining cops and prisoners find themselves fighting for their lives against a group of rogue cops intent on taking down Bishop before he testifies against them in the courtroom. Now it's up to the officers, secretaries, and inmates on the inside to band together just to survive this one night. Also starring Gabriel Byrne, John Leguizamo, Drea de Matteo, and Brian Dennehy. ~ Jeremy Wheeler, Rovi

News & Interviews for Assault on Precinct 13

Happy New Year! 20 Big Screen Celebrations to Ring in 2017
Maria Bello to Replace Rachel Weisz in "Mummy 3"
Who Wants ANOTHER Slice of "American Pie"?
View All

Critic Reviews for Assault on Precinct 13

Audience Reviews for Assault on Precinct 13