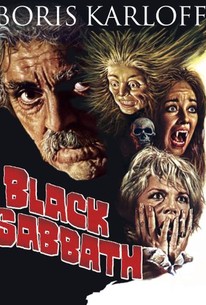 This anthology features three chilling horror stories. "Il Telefono" is credited to Guy de Maupassant, although he never wrote such a story, and concerns a woman (Michele Mercier) receiving telephone calls from beyond the grave. "Wurdulak", by Alexei Tolstoi, stars Boris Karloff as an aging vampire who can only feed on those he loves. Co-starring Mark Damon and Susy Andersen, it is clearly the best story of the three. The final tale, "La Goccia d'Acqua," is falsely credited to Anton Chekhov. It features Jacqueline Pierreux stealing a ring from a corpse she is preparing for burial, only to be murdered by the old woman's ghost. The American version differs in four major areas: the print is shorter, the stories appear in a different order, there is a linking device with Karloff speaking directly to the audience from a foggy void, and Roberto Nicolosi's musical score is replaced with one by lounge-icon Les Baxter. The American release of the film is also missing a comic coda featuring Karloff riding on horseback (or is he?); this appears in most Eurpoean prints of the film, including Mario Bava's original cut. ~ Robert Firsching, Rovi

Lidia Alfonsi
as Mary [The Telephone]

Massimo Righi
as Pietro
View All

The 16 Scariest Horror Anthology Segments
New on DVD & Blu-Ray: What We Do in the Shadows, Tangerines, and More
View All