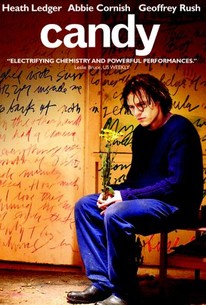 Stars Heath Ledger and Abbie Cornish look better than they should as heroin addicts, and their characters are too absorbed and self-pitying to be totally compelling.

A free-spirited art student and a roguish poet find their addiction to each other taking a back seat to their taste for heroin in director Neil Armfield's intensely personal tale of recreational drug use gone bad. When Candy (Abbie Cornish) and Dan (Heath Ledger) first fell in love, they both thought they had found all they ever needed in life. Despite financial hardships, the pair sustained themselves on the vibrant life force that burned blindingly bright as it promised an invincible future. Their intoxicating romance a blissful altered state of which heroin played only a minor role in the beginning, Candy and Dan soon decide to strengthen their bond by marrying and starting a family. Their manufactured Eden gradually becomes an uncontrollable inferno, however, as Candy's parents slowly pull away due to the pain of witnessing their daughter's slow slide into oblivion, and even chemistry professor Casper (Geoffrey Rush), who was at first complicit in their experimentation, admits that Candy and Dan's blind devotion to the drug is now forever ingrained into their commitment to one and other. As the marriage deteriorates right along with Candy's increasingly fragile mental state, Dan must make the difficult decision to either rescue her or pull away in hopes that the clarity of separation will finally empower her to break free of the addiction that binds her. ~ Jason Buchanan, Rovi

Doreen Mullen
as Woman in Pharmacy

Sean O'Riordan
as Man in Toilets
View All

"Candy" Girl to be Bond’s Next Flame?
A Few Random "Dark Knight" Nuggets
View All