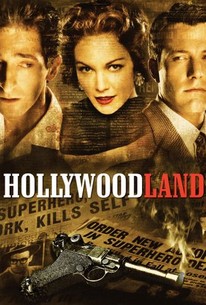 More than a movie star murder mystery, Hollywoodland takes it slow in order to reveal the intriguing details of the rise and fall of superstar fame.

The mysterious and unexpected death of an iconic Hollywood star may be just the tip of an iceberg of scandal in this showbiz drama based on a true story. George Reeves (played by Ben Affleck) was a journeyman actor who had played a small role in Gone With the Wind and appeared onscreen with the likes of James Cagney, Rita Hayworth, and Marlene Dietrich, but his career was not exactly booming when he was cast as comic-book hero Superman in a 1951 B-movie, Superman and the Mole Men. A year later, the producers of the movie launched a syndicated Superman television series with Reeves returning as "The Man of Steel." The show became a major hit, and Reeves was a star at last. However, on June 16, 1959, to the shock of many, Reeves was found dead of a gunshot wound. Police soon declared Reeves' death a suicide and closed the case, but his mother (Lois Smith) refused to believe her son took his own life, and hired Louis Simo (Adrien Brody), a private detective, to find out the truth about her son's passing. Simo found that many Hollywood insiders did not care to cooperate as he researched the Reeves case, but his digging uncovered plenty of evidence suggesting the actor did not take his own life, and he also revealed one of Reeves' deepest secrets -- while he was engaged to marry a pretty young starlet, Leonore Lemmon (Robin Tunney), Reeves was also carrying on an affair with the beautiful Toni Mannix (Diane Lane), the wife of Eddie Mannix (Bob Hoskins), a powerful and ill-tempered executive at MGM. While the producers of Hollywoodland based their story on factual accounts of the investigation into the death of George Reeves, they were denied permission to use the Superman logo and the familiar introduction to the Adventures of Superman television show by the respective copyright holders.

Robert B. Kennedy
as Tommy Carr