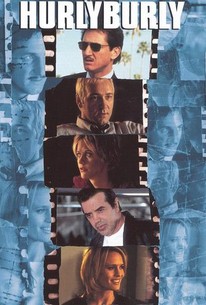 Though Hurly Burly offers a showcase of powerhouse performances from its leads, it's held back by a meandering narrative and verbose explorations of cynicism.

David Rabe's popular play of Hollywood immorality and decadence is brought to the big screen by director Anthony Drazan and an all-star cast that includes Sean Penn, Robin Wright-Penn, Kevin Spacey, Meg Ryan, Chazz Palminteri, Garry Shandling, and Anna Paquin. The film is set in the Hollywood Hills and tells the story of Eddie (Penn) a drinking-smoking-snorting-womanizing casting director and his philandering partner-roommate Mickey (Spacey). Along with their buddies Artie and Phil, they sit around and pontificate about the meaning of life -- that is, the meaning of their lives, of which there is very little. Eddie is in love with Darlene (real-life wife Wright Penn), but she is also seeing the married Mickey. When Artie brings Eddie and Mickey a "care package" in the shape of a pretty, disillusioned hitchhiker named Donna (Paquin), they take turns throwing her around until, yet again, their own empty pathetic lives preoccupy their paranoid minds. As people and relationships deteriorate everywhere, the guys try to pick Phil by giving him the gift of a washed-up exotic dancer, Bonnie (Ryan). Of course she ends up just more abused than ever as she and the rest of the gang hit rock bottom.