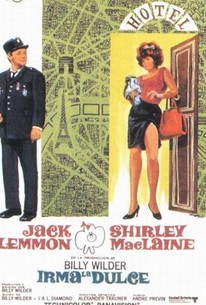 This romantic comedy opens with a resounding warning: its chief concerns are passion, bloodshed, desire, and death. "Everything," exclaims the narrator, "that makes life worth living." Irma La Douce (Shirley MacClaine) is Paris' most prosperous prostitute. Wise, endearing, and compulsively clad in green, Irma rules the rue Casanova. She triumphantly works the most coveted corner on a street where the cops gladly look the other way and the naughty johns leave tips. Her street is a content community of live and let live and good-natured desire, an Augean stable of human understanding. However, to upright Nester Patou (Jack Lemmon), the area's new policeman, genial wrongdoing is still wrongdoing. Freshly promoted from day patrol at a children's playground, the scrupulous Nestor arrests Irma and her colleagues in a bumbling, unauthorized raid. He takes pity on Irma, but harasses the guilty johns -- including the police captain. Promptly unemployed, Nester returns to the scene of his crime, the rue, and to Irma. After physically besting her pimp, Nester unwittingly takes his position. The two fall madly in love, but Nestor quickly grows jealous of Irma's patrons. Thus, he masquerades as a wealthy English aristocrat and becomes Irma's sole customer -- only to eventually grow violently jealous of himself. Soon enough, this formally righteous cop is comically jailed for his own brutal murder! As the film's prologue promises, Irma La Douce is a celebration of life from beginning to end -- unabashedly adoring lust, emotion, fervor and, above all, foolish love. ~ Aubry Anne D'Arminio, Rovi

Harriette Young
as Mimi the MauMau

Susan Woods
as Poule With the Balcony

Don Diamond
as Man With Samples

Louis Jourdan
as Narrator
View All