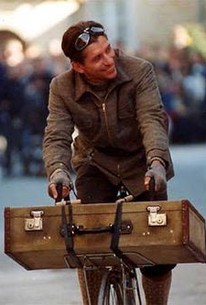 During the Nazi occupation of France during World War II, the nation's movie studios continued to operate; some filmmakers and technicians simply went along with what their new leaders demanded in hopes keeping themselves and their families safe, while others sought to subvert the messages of their captors through their work. Safe Conduct, directed by Bertrand Tavernier, is a fact-based period drama which examines two men working for a Parisian film company during 1942 and 1943, as well as their friends, family, and loved ones. Jean Devaivre (played by Jacques Gamblin) is an assistant director for Continental Pictures, a studio which has recently been taken over by the Germans and is headed by Dr. Greven (Christian Berkel), a self-styled aficionado of French filmmaking. With a wife (Marie Desgranges) and a newborn son to support, Devaivre feels he has little choice but to continue with his work, though as he rises from assisting to becoming a full fledged director thanks to the efforts of Maurice Tourneur (Philippe Morier-Genoud), he struggles to work his own views into his pictures as much as he can. Screenwriter Jean Aurenche (Denis Podalydes), a man who lives for wine, women and song (not necessarily in that order), refuses to work for Greven, and as he bounces between his many lovers - actress Suzanne Raymond (Charlotte Kady), no-nonsense streetwalker Olga (Marie Gillain), and soft-hearted Reine (Maria Pitarresi), a struggles to find a way to make a living with his words. Both Devaivre and Aurenche were real-life figures in the French film industry during the occupation, as were many of Safe Conduct's supporting characters; the real life Aurenche went on to write the screenplay for Bertrand Travernier's first feature film.

There are no featured audience reviews for Laissez-passer at this time.