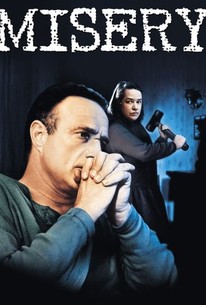 Elevated by standout performances from James Caan and Kathy Bates, this taut and frightening film is one of the best Stephen King adaptations to date.

Adapted from a Stephen King novel, Rob Reiner's Misery cast James Caan as a writer at a career crossroads. The film opens with Paul Sheldon (Caan) completing work on his latest novel, a break from his popular series of novels featuring the character Misery Chastain. He gets into a severe car accident and is saved by Annie Wilkes (Kathy Bates), a reclusive woman who nurses him back to health. Annie is a huge fan of the Misery novels, and she finishes reading the new one while Paul is convalescing. She becomes enraged when she discovers that Paul has killed off Misery. Annie injures Paul's foot severely so that he is unable to leave her house, and forces him to write a new Misery novel. A local sheriff (Richard Farnsworth) and Paul's agent (Lauren Bacall) both attempt to track down what happened to the missing author. Misery shot the relatively unknown Kathy Bates to stardom, winning her one of the few Best Actress Oscars ever bestowed for portraying an evil character.

Misery the Pig
as Herself