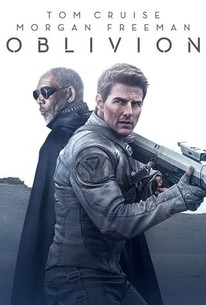 Visually striking but thinly scripted, Oblivion benefits greatly from its strong production values and an excellent performance from Tom Cruise.

2:08
Oblivion: Official Clip - We Are Not An Effective Team

Tom Cruise stars in Oblivion, an original and groundbreaking cinematic event from the visionary director of TRON: Legacy and producers of Rise of the Planet of the Apes. On a spectacular future Earth that has evolved beyond recognition, one man's confrontation with the past will lead him on a journey of redemption and discovery as he battles to save mankind. 2077: Jack Harper (Cruise) serves as a security repairmen stationed on an evacuated Earth. Part of a massive operation to extract vital resources after decades of war with a terrifying alien threat who still scavenges what's left of our planet, Jack's mission is almost complete. In a matter of two weeks, he will join the remaining survivors on a lunar colony far from the war-torn world he has long called home. Living in and patrolling the breathtaking skies from thousands of feet above, Jack's soaring existence is brought crashing down after he rescues a beautiful stranger from a downed spacecraft. Drawn to Jack through a connection that transcends logic, her arrival triggers a chain of events that forces him to question everything he thought he knew. With a reality that is shattered as he discovers shocking truths that connect him to Earth of the past, Jack will be pushed to a heroism he didn't know he contained within. The fate of humanity now rests solely in the hands of a man who believed our world was soon to be lost forever. (c)Universal

Zoe Bell
as Kara
View All