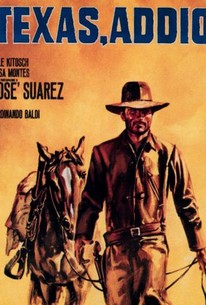 The Continental cast and scenes of intense violence may earmark Texas, Addio as a spaghetti Western, but the plot of this Italian/Spanish production unspools very much like its Hollywood counterpart. Django star Franco Nero's character provides the link; his two-fisted, taciturn Texas sheriff, Burt Sullivan, is cut from the same unwavering in-his-duty cloth as Gary Cooper's lawmen as he crosses the border to bring wealthy and sadistic Mexican crime boss Cisco Delgado (José Suárez) to justice for the murder of his father. Sullivan's body count may be staggeringly high by the film's fade-out, but his kills are strictly in defense of himself, his greenhorn brother, Jim (Cole Kitosch, aka Alberto Dell'Acqua or Robert Widmark), or later, a group of Mexican revolutionaries led by lawyer Luigi Pistilli that attempts to overthrow Delgado's corrupt regime. Director Ferdinando Baldi (whose Western curriculum vitae includes the more European-flavored Blindman [1971] and Get Mean [1975], with American ex-pat actor Tony Anthony) makes excellent use of the Almeira, Spain, locations (well photographed by future Trinity Is Still My Name director Enzo Barboni); and if his pacing is occasionally draggy, he more than makes up for it with a wealth of well-staged brawls and shoot-outs. His script (written with Django co-scribe Franco Rossetti) is lean and solid, with a hint of noir in its central dark secret regarding Delgado's relationship with Sullivan's family.

There are no critic reviews yet for Texas, Adios (Texas, Addio). Keep checking Rotten Tomatoes for updates!