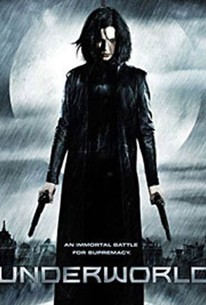 Though stylish to look at, Underworld is tedious and derivative.

2:10
Underworld: Official Clip - Why Are They After You?

A young man who has pledged his life to helping others finds himself in a pitched battle between two gangs of supernatural villains in this blend of horror story and action thriller. Michael Corvin (Scott Speedman) is a medical student who is heading home after a long day of school and work when he unexpectedly finds himself in the middle of what appears to be a rumble between two well turned-out street gangs. What Michael doesn't know is he has witnessed a skirmish between two deadly underground communities, unknown to the mortal world, who are battling for supremacy -- the Death Dealers, a tribe of vampires, and the Lycans, a band of werewolves. Selene (Kate Beckinsale) is a leading member of the Death Dealers who hears through the grapevine that the Lycans have plans to capture the aspiring doctor who witnessed their battle. Certain something is in the air, Selene begins following Michael around the city, and she finds herself growing emotionally attached to him. As Selene becomes more attracted to Michael, she becomes more convinced that the Lycans are planning a major attack against the Death Dealers, although vampire kingpin Kraven (Shane Brolly) is certain she's crediting the Lycans with more intelligence than they can muster. As Selene shadows Michael, she finds herself wanting to protect him, but her longing becomes a handicap when he's attacked by Lucian (Michael Sheen), the leader of the werewolf community, and the man she wants to save has now become a sworn enemy. Underworld was the first feature film from music video director Len Wiseman. ~ Mark Deming, Rovi

Sándor Boros
as Candidate No. 1

János Oláh
as Candidate No. 2