Days of Wine and Roses 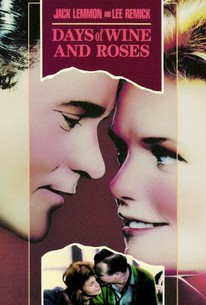 Days of Wine and Roses

Days of Wine and Roses Photos

This thoroughly depressing drama concerns the battles of a young couple against the insidiousness of alcohol addiction. Joe (Jack Lemmon) and Kirsten (Lee Remick) are young newlyweds with a seemingly bright future. Joe is an up and coming public relations worker with a promising career. When the pressures of the job become too much, he takes solace inside a bottle of booze. Kirsten joins the party in order to relate to her husband, and the two get down to some brain cell killing, liver damaging drinking that would make F. Scott Fitzgerald and W. C. Fields blush. Joe's career takes a decidedly downward turn, losing his job as the couple continues to tip more than a few. They move in Kirsten's father, who owns a greenhouse. After a night of drinking, Kirsten reveals she hid a bottle hidden under one of the greenhouse plants. In a terrifying scene, Joe tears up all the plants trying to unearth the hidden bottle, ruining his father-in-law's budding plants. Joe also goes through withdrawals in a mental hospital in yet another disturbing scene of horrible alcohol addiction. He seeks help from a 12 step group, but Kirsten can't shake the grip of demon alcohol. By now, the couple has a young daughter, and a sober Joe realizes he may have to leave the woman he loves when she becomes hopelessly addicted. The title song by Johnny Mercer and Henry Mancini won an Academy Award. while Lemmon and Remick received well deserved nominations for their gripping portrayals of the tortured couple whose lives are ruined by booze.

Charlene Holt
as Guest
View All

Critic Reviews for Days of Wine and Roses

Audience Reviews for Days of Wine and Roses

Days of Wine and Roses Quotes