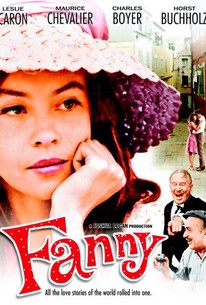 Fanny was adapted from the Broadway musical of the same name, which in turn was based on the final chapter of Marcel Pagnol's "Marseilles Trilogy". Pagnol's original, titled Cesar, ends with protagonist Marius returning to the sea, leaving behind his lover Fanny and their son. Expanding upon the original, Fanny picks up the narrative nine years later. Marius (Horst Buchholtz) finally meets his son and is reunited with Fanny (Leslie Caron). She tells him that Panisse (Maurice Chevalier), the elderly suitor who married Fanny to save her from disgrace, is dying. On the verge of shuffling off his mortal coil, Panisse gives Fanny and Marius his blessings, hoping that they'll marry at long last. Charles Boyer co-stars as Cesar, the philosophical gent portrayed in the 1930s film versions of the Pagnol trilogy by the great Raimu. Fanny goes its merry way without any of the songs in the original Broadway score, despite the proven musical talents of Caron and Chevalier. Producer/director Joshua Logan saved himself plenty of embarrassment when he agreed not to release this film as Joshua Logan's Fanny.

Joel Flateau
as Cesario
View All