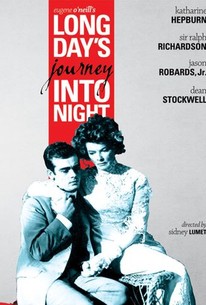 Playwright Eugene O'Neill sold Random House the text of his intensely autobiographical 1941 play on the proviso that the play not be produced during O'Neill's lifetime. Two years after the playwright's death in 1953, the play was given its first Broadway staging and won a Pulitzer Prize. Set in 1912 New England, the story takes place in the summer home of aging actor James Tyrone (Ralph Richardson) and his family. Tyrone, patterned after Eugene O'Neill's father James O'Neill, has long abandoned any aspirations to be a truly great actor, choosing instead to tour in the same weary stage vehicle year after year. Thanks to an earlier act of stinginess on Tyrone's part, his wife Mary has turned into a rambling morphine addict, with little or no contact with reality. Oldest son Jamie is a troublemaking alcoholic, envious of the writing talent of sickly younger brother Edmund (the Eugene O'Neill counterpart). The long's day journey concludes with a hellish night in which the three Tyrone men sit about drunkenly as Mary Tyrone hallucinates about her younger, happier days. Katharine Hepburn emerged from a three-year retirement to essay the back-breaking role of Mary Tyrone; Ralph Richardson exhumed all the "ham" of his student-actor days to portray the pathetic James Tyrone; Jason Robards Jr., a man seemingly put on this earth to interpret O'Neill, repeats his Broadway role as Jamey; and Dean Stockwell adds one more superb characterization to his gallery of portrayals as the tubercular Edmund. ~ Hal Erickson, Rovi