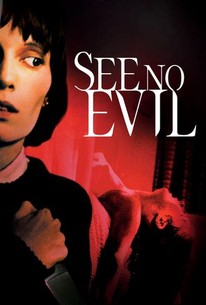 This riff on Wait Until Dark is a mixed bag but still manages to offer a few surprises. Brian Clemens' script starts off with a clever premise and offers some solid moments of suspense. Unfortunately, See No Evil begins to drift in its final third, when it introduces one too many plot complications to keep the identity of the killer a mystery. As a result, it loses track of its heroine (the viewer will lose track of how many scenes Mia Farrow spends stumbling around and shouting for help during the latter part of the film). That said, Farrow makes a likeable heroine and is surrounded by a professional cast turning in solid performances. Better yet, director Richard Fleischer gets plenty of opportunities to show off his directorial skills during the many setpieces and he's definitely up to the task: the scenes where Farrow faces off with the killer in her deserted house are staged effectively and make great use of sound as a tool for suspense. Ultimately, See No Evil is second-tier thriller material but it is made with enough skill to make a decent time-killer for anyone in the mood for a few thrills.

Max Faulkner
as Steve's Man No. 1

Scott Fredericks
as Steve's Man No. 2

Reg Harding
as Steve's Man No. 3
View All

Box Office Wrapup: "Cars" Parks Itself at #1
View All