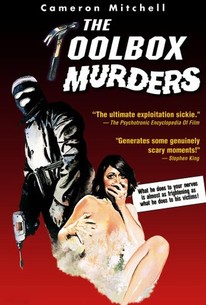 After a tense, bloody beginning, The Toolbox Murders takes a turn first into TV movie-style suspense and then stumbles towards an incredibly silly conclusion. Despite a sensational reputation amongst splatter fans (including Stephen King, who provides a promotional blurb for the video release's packaging) the only gore occurs within the first 30 minutes, as a ski-masked maniac cuts a bloody swath through an apartment complex. Four attractive young women are dispatched in harrowing style with a variety of power tools, indicating a killer taking extreme sadistic pleasure in his work. It's no surprise when the apartment owner (Cameron Mitchell) is revealed to be the monster, but his claims of putting the "dirty" women out of their misery quickly doesn't jive with what's been presented earlier. He murders in order to avenge the unrelated car accident death of his only daughter, and to this end, kidnaps a virginal 15- year-old girl to replace her. Unfortunately, his nephew is also fixated on the dead girl, and has his own obsessions. Director Dennis Donnelly did most of his work in TV, thus the preponderance of familiar television faces on display: his brother Timothy Donnelly from Emergency!, Wesley Eure from Saturday morning's Land of the Lost, and Pamelyn Ferdin, a '70s sitcom perennial with many guest shots including The Brady Bunch and The Odd Couple. The incongruity of these appearances, along with the clumsily expressed psychosis of the villains, destroys any sense of dread created at the outset of The Toolbox Murders, and as a result, the only enjoyment that can be obtained from the film is ultimately derisive.

Critic Reviews for The Toolbox Murders

Audience Reviews for The Toolbox Murders