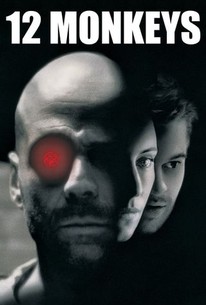 The plot's a bit of a jumble, but excellent performances and mind-blowing plot twists make 12 Monkeys a kooky, effective experience.

An intense film about time travel, this sci-fi entry was directed by Terry Gilliam, a member of the comedy troupe Monty Python. The film stars Bruce Willis as James Cole, a prisoner of the state in the year 2035 who can earn parole if he agrees to travel back in time and thwart a devastating plague. The virus has wiped out most of the Earth's population and the remainder live underground because the air is poisonous. Returning to the year 1990, six years before the start of the plague, Cole is soon imprisoned in a psychiatric facility because his warnings sound like mad ravings. There he meets a scientist named Dr. Kathryn Railly (Madeleine Stowe) and Jeffrey Goines (Brad Pitt), the mad son of an eminent virologist (Christopher Plummer). Cole is returned by the authorities to the year 2035, and finally ends up at his intended destination in 1996. He kidnaps Dr. Railly in order to enlist her help in his quest. Cole discovers graffiti by an apparent animal rights group called the Army of the Twelve Monkeys, but as he delves into the mystery, he hears voices, loses his bearings, and doubts his own sanity. He must figure out if Goines, who seems to be a raving lunatic, holds the key to the puzzle. ~ Michael Betzold, Rovi

Bruce Kirkpatrick
as Policeman No. 1

Wilfred E. Williams
as Policeman No. 2

Louis Lippa
as Patient at Gate

Johnnie Hobbs Jr.
as Officer No. 1