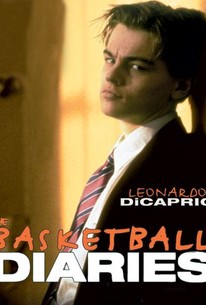 In spite of its young leading man's heroic efforts to hold it all together, a muddled message prevents The Basketball Diaries from compelling as a cautionary tale.

Very loosely based on the memoir of the same name, The Basketball Diaries transposes the late '60s adolescence of writer/artist Jim Carroll to some unspecified time period at least 15 years later, further confusing the timeframe with three decades of rock music, some by Carroll himself. Jim (Leonardo DiCaprio) and his Catholic school chums are on the hottest basketball team in New York, but their friend Bobby (Michael Imperioli) languishes in the hospital with leukemia. In-between typically boyish adventures, Jim scribbles in his notebook and experiments with sex and drugs. His group of friends begins to disintegrate after coach Swifty (Bruno Kirby) not only makes a pass at Jim, but also catches him and his pals using drugs on the court and kicks them off the team. Out of school and on the streets, Jim turns tricks, betrays friends, robs stores, and deals drugs to feed his heroin addiction. Not even the efforts of former addict Reggie (Ernie Hudson) can cure Jim. Mark Wahlberg appears as one of Jim's basketball and drug buddies, while Carroll himself makes a memorable cameo as an addict who describes the almost Catholic rituals of shooting heroin.

Nick Gaetani
as Referee No. 1

Lawrence Barth
as Referee No. 2

John Hoyt
as Billy the Bartender
View All

News & Interviews for The Basketball Diaries

Critic Reviews for The Basketball Diaries

Audience Reviews for The Basketball Diaries