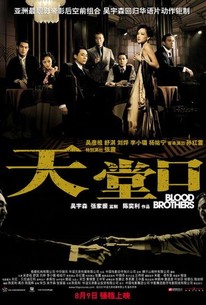 Three best friends who are barely getting by as fishermen in the small village of Zhujiajiao depart to seek their fate in Shanghai in director Alexi Tan's reworking of the John Woo action classic Bullet in the Head. Feeling trapped by circumstance in the only place they have ever known, Kang, his brother Hu, and their best friend Fung decide to take their fate into their own hands by moving to Shanghai. Upon arriving in the bustling city, the naïve trio gradually finds their innocence corrupted as they fall into the deepest depths of the criminal underworld. The starting point for their harrowing descent is the infamous Paradise Club: the most popular - and dangerous - nightclub in all of Shanghai. In the Paradise Club, Lulu is the songbird that every man wants to capture, yet she remains locked securely in the cage of owner and underworld crime kingpin Boss Hong - or so he thinks. Because when the stage lights go down and the big guy isn't around, his right hand man Mark starts making the moves on Lulu. Of course Lulu is no innocent either, and as this pair conduct their dangerous affair both enemies and allies alike begin plotting a way to wrestle control of the city from the ruthless Boss Hong. As the tense situation between Boss Hong and his many conspirators begins to boil over, Kang, Hu, and Fung make a desperate grab for power that quickly pays off. But success in Shanghai doesn't come cheap. With their power nearly cemented in the land of plenty, Fung will be forced to choose between love and a life of crime while wrestling with his troublesome conscience, Hu will enter into a monumental struggle against his own inner weakness, and power-hungry Kang will allow nothing to prevent him from realizing his own ambitions. Now, as lives hang in the balance and blood begins to flow, the chance for redemption fades with each passing day. ~ Jason Buchanan, Rovi

There are no critic reviews yet for Tian tang kou (Blood Brothers). Keep checking Rotten Tomatoes for updates!