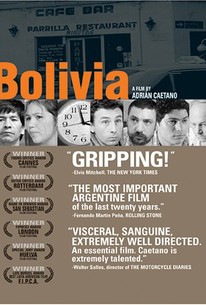 A man leaves the life he's known behind to support his family as an undocumented worker in this realistic drama. Freddy (Freddie Flores) was born and raised in Bolivia, but when the intervention of American drug enforcement agents led to the destruction of the cocoa fields where he worked, he finds himself with no way to support his family. Desperate for work, Freddy is smuggled into Argentina, where he's given a job by Don Enrique (Enrique Liporace), the owner of a Buenos Aires cafe who employs a number of illegal aliens, prompted less by benevolence than the economy of not having to pay them the same wages as legitimate workers. Freddy is given a job as a cook, where he's paid a mere 15 pesos a day (a phone call back home costs ten pesos), and he soon discovers that many of the townspeople in Buenos Aires don't much care for immigrants. Freddy bonds with Rosa (Rosa Sanchez), an illegal from Paraguay who waits tables for Don Enrique, as they deal with hateful and abusive treatment both at work and on the streets. Shot on videotape, Bolivia features a cast of non-professional actors for greater realism, with only Enrique Liporace having had prior onscreen experience as a performer. ~ Mark Deming, Rovi

There are no featured audience reviews for Bolivia at this time.