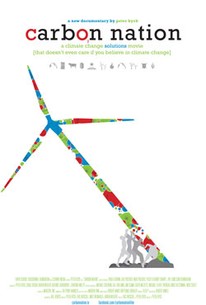 Carbon Nation is a feature length documentary about climate change SOLUTIONS. Even if you doubt the severity of the impact of climate change or just don't buy it at all, this is a compelling and relevant film that illustrates how SOLUTIONS to climate change also address other social, economic and national security issues. 'Carbon Nation' is an optimistic discovery of what people are already doing, what we as a nation could be doing and what the world needs to do to prevent (or slow down) the impending climate crisis. We already have the technology to combat most of the worst-case scenarios of climate change, and it is very good business as well. We meet a host of entertaining and endearing characters along the way, including entrepreneurs, visionaries, scientists, business, and the everyday man, all making a difference and working towards solving climate change. We interviewed over 200 people - included in the film are Richard Branson (CEO, Virgin Group), Thomas L. Friedman (New York Times), Former CIA Director James Woolsey, Van Jones (Founder, Green For All), Col. Dan Nolan, U.S. Army (Ret), Bernie Karl (Geothermal pioneer from Alaska,) Amory Lovins (Chairman, RMI), Art Rosenfeld (Commissioner, California Energy Commission), Denis Hayes (Founder of Earth Day), Ralph Cavanagh (NRDC), Lester Brown (Earth Policy Institute), John Rowe (CEO, Exelon), Jim Rogers (CEO Duke Energy), Cliff Etheredge (West Texas wind pioneer,)and more climate change pioneers. Public opinion is sliding the wrong way - far fewer people are concerned about climate change than even a year ago. We've made Carbon Nation to give a majority of people an entertaining, informed and pragmatic primer about why it's incredibly smart to be a part of the new, low-carbon economy: its good business. Carbon Nation's optimism and pragmatism are appealing across the political spectrum. Carbon Nation is a film that celebrates solutions, inspiration and action. -- (C) Official Site

There are no featured audience reviews for Carbon Nation at this time.