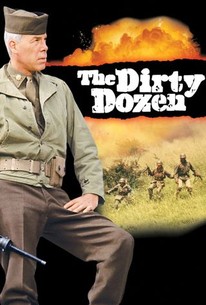 Amoral on the surface and exuding testosterone, The Dirty Dozen utilizes combat and its staggering cast of likable scoundrels to deliver raucous entertainment.

Director Robert Aldrich took what he considered a hopelessly old-fashioned script by Lukas Heller and Nunnally Johnson and fashioned The Dirty Dozen into one of MGM's biggest moneymakers of the 1960s--and the sixth highest-grossing film in the studio's history. Lee Marvin plays Major Reisman, assigned to coordinate a suicide mission on a French chateau held by top Nazi officers. Since no "normal" GI can be expected to volunteer for this mission, Reisman is compelled to draw his personnel from a group of military prisoners serving life sentences. This "dirty dozen" includes a sex pervert (Telly Savalas), a psycho (John Cassavetes), a retarded killer (Donald Sutherland), and the equally malevolent Charles Bronson, Trini Lopez, Jim Brown, and Clint Walker. On the dim promise of receiving pardons if they survive, the criminals undergo a brutal training program, then are marched behind enemy lines dressed as Nazi soldiers, the better to overtake the chateau and kill everyone in it--including the innocent wives and mistresses of the German officers. ~ Hal Erickson, Rovi

News & Interviews for The Dirty Dozen

Critic Reviews for The Dirty Dozen

Audience Reviews for The Dirty Dozen