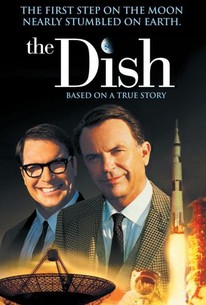 A feel good movie without an abundance of mush.

In this comedy, as American astronauts prepare to make one giant leap for mankind, a small Australian town stumbles through its own small steps to help. In the summer of 1969, Cliff Buxton (Sam Neill) leads a team of scientists overseeing the operations of one of the world's largest radio telescope dishes, nestled in a New South Wales community of sheep farmers. As NASA prepares for Apollo 11, the first manned voyage to the moon, Buxton and his crew are asked if they will allow their telescope's dish to be used as a backup receiver for the television transmission from the moon, should the main receiver in California fail. Buxton and his men are more than happy to help, and the village is agog as they gear up for their own small part in one of the world's greatest adventures. Mayor McIntyre (Roy Billing) and his wife May (Genevieve Mooy) are thrilled to be greeting a small but steady stream of important visitors, though many of the locals are not especially good with etiquette, and several members of Buxton's team, most notably high-strung Mitch (Kevin Harrington), are less than enthusiastic about Al Burnett (Patrick Warburton), the know-it-all NASA technician brought in to oversee the Australian operations. When a change in Apollo 11's schedule means the Australian dish will have to pick up the vital broadcast from the moon, Cliff, Mitch, and Al must put aside their differences to pull the show together. Though played for laughs, The Dish was inspired by actual events. ~ Mark Deming, Rovi

Genevieve Mooy
as May McIntyre

News & Interviews for The Dish

Critic Reviews for The Dish

Audience Reviews for The Dish