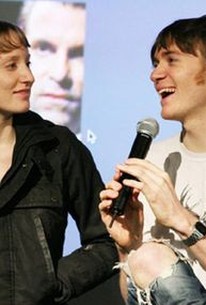 One couple's rocky road toward togetherness is mapped in this comedy drama which melds elements of documentary and fiction. Arin (Arin Crumley) is a struggling independent filmmaker who pays the rent by shooting and editing wedding videos; he loathes the "four-eyed, two-mouthed, eight-limbed" beasts known as couples in love, but he would also prefer to be less lonely than he is. However, Arin is terrified of talking to women, and has a borderline phobia about sexually transmitted disease. On an Internet dating site, Arin meets Susan, (Susan Buice), an artist who wants to pursue a career in painting but in the meantime supports herself by waiting tables. Susan's attitudes about romance are only slightly more optimistic than Arin's, but after exchanging photos and messages, the two sense they have something in common. But both are wary of traditional courtship, so they make an unusual agreement -- they can chat online, they can trade videotapes, they can exchange poems and sketches, and they can communicate by any means besides talking to one another face-to-face. While this arrangement presents a number of challenges, it also opens up their expressive abilities as well as their feelings for one another, and slowly they both find themselves revitalized romantically and aesthetically. Four Eyed Monsters was written, directed, and edited by the real-life couple Susan Buice and Arin Crumley, who in addition to playing themselves loosely based the film on their own courtship; they also distributed the film as well.