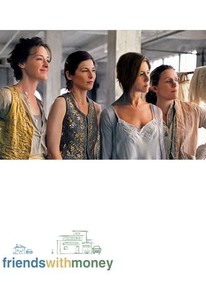 A single woman envies the security of her married friends, while they in turn dream of her freedom in this comedy drama. Olivia (Jennifer Aniston) is a single woman in her mid-thirties who feels she's reached a crossroads in her life. Unhappy with her career as a teacher, Olivia quits and takes a job as a maid until she sorts out her feelings. However, Olivia feels as if she could use some support, both personal and financial, from her best friends, all of whom at very least have more in the bank than she does. But that's not to say they don't have problems of their own. Christine (Catherine Keener) and her husband Patrick (Jason Isaacs) are screenwriters who have discovered that collaborating is more stress than they can deal with. Jane (Frances McDormand) is married to Aaron (Simon McBurney); they work together as designers, but while their professional relationship is cordial, they've become numb to one another as lovers and friends. And Franny (Joan Cusack) and Matt (Greg Germann) are a couple who comfortably support themselves and their children thanks to an inherited fortune; while their material needs are met, emotionally they can barely handle marriage and parenthood. Friends With Money was written and directed by Nicole Holofcener, who previously made the acclaimed independent features Walking and Talking and Lovely & Amazing.

Ty Burrell
as Aaron No. 2

Will Keenan
as Man

News & Interviews for Friends With Money

Critic Reviews for Friends With Money

Audience Reviews for Friends With Money