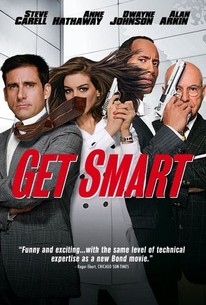 Get Smart rides Steve Carell's considerable charm for a few laughs, but ultimately proves to be a rather ordinary action comedy.

40-Year-Old Virgin star Steve Carell steps into the telephonic shoes of television's most beloved bumbling detective in this big-screen adaptation of the hit 1960s-era comedy series created by Mel Brooks. The evil geniuses at KAOS have hatched a diabolical plot to dominate every living man, woman, and child on the planet, and their plot gets under way as they attack the headquarters of the U.S. spy agency Control. As a result of the attack, the identity of every agent working for Control has been compromised. Realizing that the only way to thwart KAOS' evil plan is to promote eager but inexperienced Control analyst Maxwell Smart (Carell) to the rank of special agent, the Chief (Alan Arkin) reluctantly teams Smart with Agent 99 (Anne Hathaway) -- a veteran super-spy whose beauty is only surpassed by her lethality. With no real field experience to speak of and nothing but sheer enthusiasm and a handful of fancy spy gadgets to help him accomplish his deadly mission, Maxwell Smart his new partner, Agent 99, will be forced to faces malevolent KAOS head Siegfried (Terence Stamp) and his loyal army of minions in a decisive fight that will determine the fate of the free world. Dwayne "The Rock" Johnson, David Koechner, Terry Crews, and Ken Davitian co-star. ~ Jason Buchanan, Rovi

Alan Arkin
as The Chief

James Caan
as The President

David A. Parker
as Agent 50

Sean Segal
as Kid in Minivan

Karri Turner
as Mom in Minivan

Ryan Seacrest
as Himself
View All

News & Interviews for Get Smart

Critic Reviews for Get Smart

Audience Reviews for Get Smart