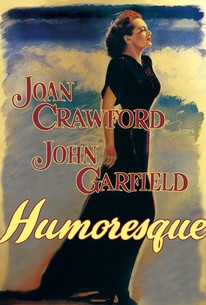 Fannie Hurst's novel Humoresque is the lachrymose tale of a famed Jewish-American violinist who forgets all about his friends and family in his rise to fame. Screenwriters Clifford Odets and Zachary Gold refashioned this timeworn material into a first-class, big-budget soap opera, completely dominated by the high-octane talents of Joan Crawford and John Garfield. A gifted musician, Garfield rises from the slums to the upper echelons of society, thanks to the patronage of wealthy, alcoholic Crawford. Virtually ignored by her husband Paul Cavanaugh, Crawford adopts Garfield as her lover as well as her protégé. He is only mildly offended by the setup; she, on the other hand, becomes jealous and possessive. It is not a woman who comes between Crawford and Garfield: it the intensity of his talent, not to mention the spectre of the great composers whose works he interprets so brilliantly. Garfield's virago of a mother (Ruth Nelson) feeds upon Crawford's jealousy, planting the seeds of guilt for (allegedly) holding her son back. The ultrastylish suffering of Joan Crawford and the street-punk insouciance of John Garfield (who looks like a "Dead End Kid" even while wearing a tux) is counterpointed by the phlegmatic comedy relief of Oscar Levant.

Robert Blake
as Paul Boray as a Child

Tommy Cook
as Phil Boray as a Child

Don Turner
as Man with Dog

Ann Lawrence
as Florence as a Girl

Sylvia Arslan
as Gina as a Girl
View All