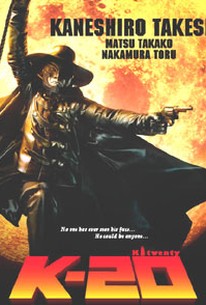 A good man takes on the guise of a bad guy to expose evil and help the needy in this period action-adventure story based on the manga by Soh Kitamura. The story takes place in 1949, in an alternate reality in which Japan stayed out of World War II and the nation is ruled by a handful of wealthy and uncaring aristocrats while most of the citizens have become mired in poverty. A villainous criminal genius known as K-20 (Kaijin Nijumenso-den) targets the powerful, though he's more interested in his own well being than in justice for the impoverished. Heikichi Endo (Takeshi Kaneshiro) is a talented circus performer who is chronically short on money, and when the publisher of a scandal sheet asks him to get photos of the secret wedding of well-known police detective Kogoro Akechi (Toru Nakamura) and Yoko Hashiba (Takako Matsu), the daughter of a wealthy business magnate, he eagerly takes the assignment. But K-20 pulls a daring raid at the wedding party, and Heikichi is blamed for the crime. Determined to prove his innocence, Heikichi breaks out of jail and sets out to expose K-20 by becoming a white-hat version of K-20, using an arsenal of gadgets created by his elderly friend Genji (Jun Kunimura) and his own acrobatic skills. Directed by Shimako Sato, K-20: Kaijin Nijumenso-den (aka K-20: Legend of the Mask received its North American premiere at the 2009 Santa Barbara Film Festival. ~ Mark Deming, Rovi